Mayor inspires youngsters to use their voice

Councillor Adam Jogee, 29, is the Mayor of Haringey for 2020-21 and is the youngest mayor Haringey has ever had.  Adam grew up in Hornsey, right in the middle of the borough and attended Weston Park Primary School and Highgate Wood Secondary School.

Cllr Jogee is very proud of his Zimbabwean and Jamaican roots as well as the fact he is the first Mayor of Haringey from the Muslim community.

What was your favourite subject at school?

Tell us about your school career and how you ended up becoming Mayor of Haringey
I went to Weston Park Primary School which borders Hornsey. My mum and dad ran the shelter scheme next door and I was one of the first few pupils to start at Weston Park in the early nineties. Because it was a new school there were no classes older than us, it was a very interesting environment to be in because we were kind of filling up the school as we went along.

I ran for the school council in year 3, 4 and 5 and lost and then I won in the last year, year 6. My political interests were clearly there at an early age and this message of perseverance is one that I’d certainly take from my early childhood memory.

I went to secondary school in Crouch End and then, after that, I went to college and then to SOAS University (the School of Oriental and African Studies). A mixture of all those educational opportunities, my big mouth and interest in politics took me to Haringey council in the local elections in 2014. I was 22 when I was elected – so the youngest elected councillor. I was re-elected in 2018 and then I had the immense privilege of being elected as the mayor of Haringey in 2020.

What does a typical day in your job look like?

There’s no typical day in the mayor’s life. Because I became mayor during the second lockdown, I didn’t get the opportunity to do the things that many other mayors do – being out and about with tonnes of engagements and so on. I’ve tried to do as much as I can by meeting people on Zoom and in as socially distanced ways as possible. There’s no real typical day but my main responsibilities would be providing a sort of moral leadership for the council, acknowledging and celebrating all the good things that happen here and providing support to residents when bad things happen or upsetting things happen. I get lots of emails so there’s lots of talking to people, but moreover, I think the most important and typical thing is being a part of Haringey and making sure people know what a great place it is to live and work in.

What is your favourite thing about your job?

My favourite thing about being mayor, (despite me saying that I haven’t been able to meet all people I’d want to) is probably being able to meet people, and learning about all the good things people are doing, hearing their concerns and being able to celebrate Haringey and its people.

What advice would you give to a young person who’s interested in having a job like yours or becoming the Mayor?

It’s probably less advice and more a sort of, call to arms: politics is a noble profession and an important one, it’s vital that all people from all communities are able to stand up and be heard and be counted. If you think the world could be a better place and you think you have the will to make it so, then stand or run and make sure your voice is heard.

Join a political party, whichever one it is, because that is the vehicle to which you’re able to contribute to making your community a better place. More importantly, you’re in the room when all the existing politicians need to be re-selected for elections and you’ll soon see they show an interest in you and your issues. So be in the room and make sure you’re heard.

You do make sacrifices in terms of family and friends and how much time you can spend with them but the ability to make or help make people’s lives better is an immense one and I would recommend anyone who has that passion to make the world a better place to run for office. Maybe one day you’ll be able to wear a chain like this.

To be a mayor, what sort of skills do you need and did you learn any of them at school?

You have to have some personal attributes like being able to give speeches, for example, that can be very nerve-wracking. You have to have the ability to hold your tongue when you need to – which I’m still learning – some may say! You also need to be able to empathise and understand where other people are coming from – what they’re experiencing, where their concerns may be, which isn’t always easy. We all have our own issues and challenges and when we take on other people’s, that can sometimes feel very full on.  You’re in a role to help make people’s lives easier and better, that is the job, in essence.

In terms of the other skills you might have learnt in school – being respectful to people, how to work with people, understanding that there’s nothing wrong with asking a question if you don’t know the answer and that sort of team spirit vibe that you get from primary school in particular.

It’s not necessarily true to say ‘I don’t like public speaking, I can’t be a politician’, you can get support and training with that, or ‘I get a bit embarrassed talking to people I don’t know’, well you learn that the more people you speak to, the easier it becomes.

Each person brings their own life experience into how they do the job too so there’s no kind of set, definitive list of skills.

If you care enough, everything else falls into place.

What advice would you like to give to young people today?

The most important thing I’d say is speak up, speak out and speak often but never allow anyone to tell you that your voice, your view, your opinion doesn’t count. As I said earlier, if you think that you can make the world a better place, show people that you can, ask for help, build the alliances and relationships that you need to bring people with you.  Most importantly, never be shouted down and never allow anyone to tell you that your voice doesn’t matter because it does. Please make sure that you know your power and use your power as and when you have the opportunity to do so.

Adam met with child School Councillors from Bounds Green Primary School’s in March and inspired them to continue working for the good of their school and community, below is a thank you letter from a Year 2 student: 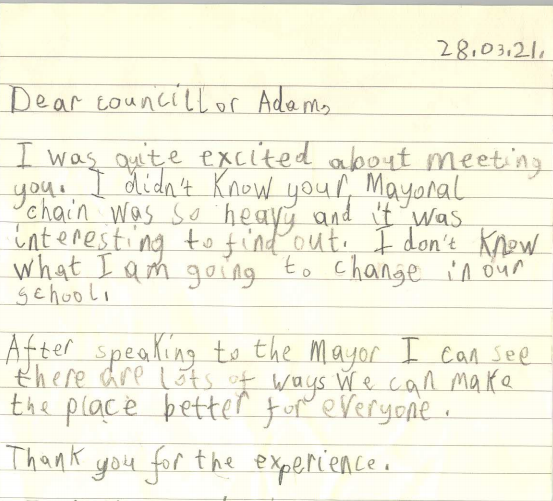