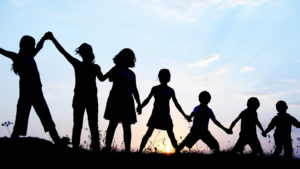 We often think of role models as being heroes or heroines, sports stars or world leaders, change-makers or those who are dramatically impacting the world – people who are out of reach and infallible.

But in reality, we are surrounded by role models both good and bad. We are also role models influencing others day in and day out ourselves. We all know the impact a teacher can have on a young person, and the same is true of all meaningful encounters a young person can have with adults, especially when the adults are relatable, and they can see ‘people like me’ in them.

Role-modelling happens via mechanisms in our brain known as the mirror system. We literally mirror and absorb the behaviour, attitudes, values and moods of those around us often without realising, continually learning and adapting to the world we live in. From small behaviours like a smile or a yawn to lasting behaviours like attitudes and values. Take for example, a study published in 2007 by New England Journal of Medicine observing more than 12,000 participants for 30 years which found that people are more likely to gain weight if those they interact with gain weight. The chances of gaining weight increased by an astounding 171% if a close friend had done so, in other words ‘someone like me’.

We almost absorb the behaviour of those around us – particularly those we’re close to and connect with – by osmosis. And this isn’t just true of gaining weight; it covers almost everything we do. In fact, this mirroring is critical to developing the social and emotional skills that lie at the heart of being human. We don’t just ‘get’ these skills they need to develop through iterative interaction, repeated thousands of times in order to enable the systems in our brain to develop and grow. This occurs throughout life but is heightened in adolescents when the social brain is undergoing extraordinary levels of development.

So, what happens when that’s missing, when children don’t have the close relationships with people who believe in them, an adult who they can connect with? A study carried out by the Early Intervention Foundation found that the impact of neglecting to develop the social and emotional skills which can only be learnt through this type of relationship cost the government around £17 billion annually – a result of ‘picking up the pieces of damaging social issues affecting young people’. Whereas the authors explain that helping children to develop these social and emotional skills leads to hugely positive outcomes including better mental health, improved physical health, and a higher likelihood of getting a good job.

These skills are not only essential to life outcomes, but they are also becoming more and more critical to the future of the workforce too. A report published by leading global consultancy McKinsey found that with an increase in automation and Artificial Intelligence there will not only be a higher need for technical skills but also a far greater need for well-developed social and emotional capabilities. The report states that ‘the demand for social and emotional skills will grow across all industries by 26 percent in the United States and by 22 percent in Europe by 2030.’  Meanwhile they predict that the need for basic cognitive skills will decline.

So, these skills are critical. But if they are learnt through interacting with and modelling the behaviour of others, especially those who are trusted – who young people can connect with and are exposed to – how do we improve children’s access to them? As teachers there is the opportunity to be more conscious of the need to really connect and be present and have meaningful interactions. The same is true for parents and relatives, by simply spending more time face-to-face and building trust and connecting with kids it will begin to build these skills. But with an ever-increasing pace and an already packed curriculum and more time spent looking at screens this isn’t always easy. And for the teachers who have huge classes it’s nearly impossible to give that attention to every child. So, what can we do – especially for those children who don’t have any positive role-models in their family life?

This is where mentoring provides a critical lifeline. Mentors enable social and emotional skills learning without us even being consciously aware of ‘how’ that is happening. Simply being with a teen and showing interest in them allows the natural mechanisms in the brain to grow and develop.

Each mentoring relationship has the possibility of unlocking the innate potential of each teen that they connect with. The opportunity for teens to connect with a real person who is there purely for them – the one-to-one attention will develop their social and emotional skills, it’s just the way it works. But better still these mentors provide a line of sight to what’s possible and how it’s possible. These relationships are most effective when a mentee can connect with someone like me due to something known as the ‘homophily principle’.

In the same way we tend to think of role models as being infallible we also tend to think of mentors as needing to have been model pupils or to be doing exceptionally well with their careers in order to play that role. But we are more likely to form trusting connections, essential for the natural mechanisms of the brain to work, with people who are similar to us based on characteristics like age, race, gender and ethnic origin. And this is especially true for teenagers. Counter to what we may naturally think of when considering mentors – that may not be someone who was academically brilliant. What’s critical is that teens can see ‘someone like me’ to connect with. And if we train mentors effectively, research shows that the mistakes they made provide an immensely powerful lesson to the mentee.

We are all role models to youngsters and we have the opportunity to have a profoundly positive impact on their lives. You don’t have to be perfect to be a good mentor or role model. Nor do the mentors we match with youngsters through Future First. By providing the mentors with the right training: an improved level of self-awareness, an understanding of their own journey and an understanding of how to relate effectively we can match them with ‘someone like me’. Working in this way, the power of mentoring offers the opportunity to provide hundreds more teens with not only better career options but also the chance to live a healthier and more fulfilled life.

Extract from Mirror Thinking – Why Role Models Make Us Human

The story of Terrell and Terence – mentoring in practice:

A brilliant example of how this plays out can be found in a U.S. mentoring scheme which has been running for over 100 years. The Big Brother Big Sister scheme matches young people from low-income backgrounds with young adult volunteers who are typically between 20 and 34 years of age.

Mentors are encouraged to form a supportive friendship with the youths, as opposed to modifying the child or adolescent’s behaviour or character.  There are numerous moving stories of the outcomes.

For example, 11-year-old Terrell was, according to his aunt, in a ‘really dark place’ and ‘missing something’ from his life. He was signed up to the scheme and matched with Terence, who had himself been mentored when he was younger. Terrell lived with his aunt because both of his parents were in prison. His little brother had died aged three and he was separated from his older brother and younger sister. Unsurprisingly, he had deep issues with trust and anger, responding quickly and aggressively to situations he found difficult. Terrell’s aunt and uncle wanted to help, but also had reservations about the scheme. Given what Terrell had been through, the last thing they wanted, in his aunt’s words, was ‘to introduce him to someone new who could potentially not hang around’. Terrell was also reticent, talking about how he felt at the time: ‘With my background, with what I’ve been through in my life, I didn’t trust people a lot.’

But Terence was committed and developed the connection needed to help Terrell. He never pushed him to talk about things he didn’t want to, but remained consistent, showing him that he wasn’t going anywhere. A year into their relationship Terence recalls how Terrell first began to open up. They drove past a cemetery and Terrell said ‘my brother’s over there, he’s buried over there’.

His aunt recalls: ‘Terence stepped right in and before I knew it, I could see the light start to glow in Terrell again.’ Terrell says that being able to open up to Terence and having him as a role model has changed his life. Terrell doesn’t skip class when his friends do. He knows what he wants out of life and is focused on getting there. ‘My future plans are to go to college, join the National Guard, be a dentist,’ Terrell says. He also wants to be ‘a Big Brother like Terence and pass it on’.  Having someone to model provided Terrell with a guide to how he could be and how things could turn out learning from someone very similar to himself. This was someone who could provide the opportunity for direct social and emotional learning, typically less available in a busy household or environment where carers are struggling to make ends meet.