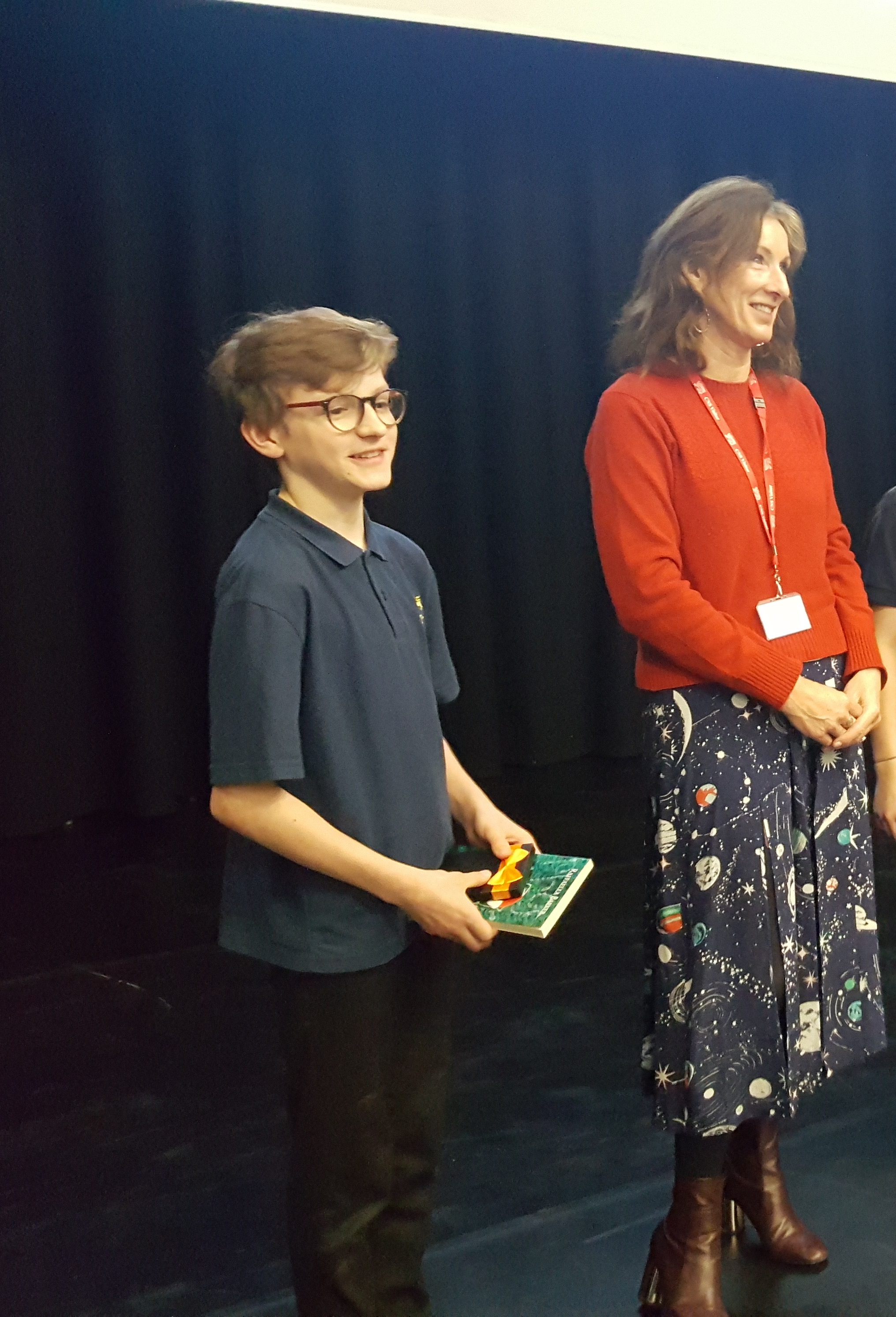 Alfie Clay, a student at City of Norwich School, has won our competition to dream up ingenious jobs of the future imagining how the world of work will change by 2039.

Alfie was one of 250 Year 7 students across our member schools in Norwich who entered the competition, judged by Norfolk author Raffaella Barker.

Students were asked to imagine a world 20 years in the future and to write to their current selves describing the strengths and skills they need for their job, what thrilled them about it and how it fitted in with their life.

Alfie, as Sir Alfie Clay, becomes an Underground Lost Life Explorer in a secret organisation fighting X- tech which wants to rid the world of humans and replace them with robots.

We’re pleased to publish Alfie’s entry, along with the five runners up, below. 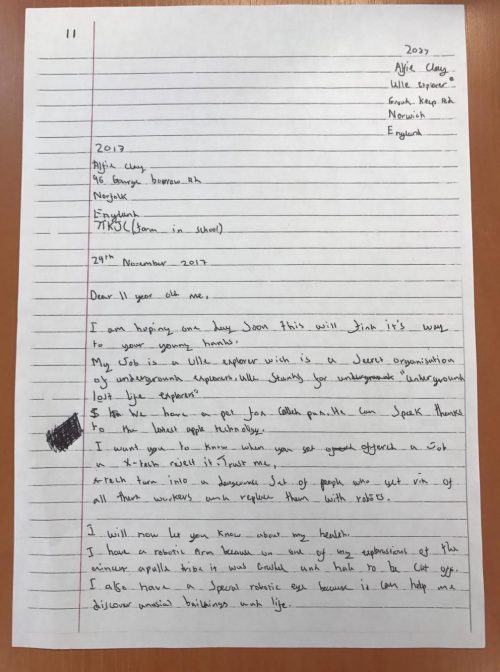 I am hoping one day soon this will find it’s way to your young hands.

My job is a Ulle explorer which is a secret organisation of underground explorers. Ulle stands for ‘underground lost life explorers’.

We have a pet fox called Pur. He can speak thanks to the latest Apple technology.
I want you to know when you get offered a job at X-tech reject it. Trust me, X-tech turn into a dangerous set of people who get rid of all their workers and replace them with robots.

I will now let you know about my health. I have a robotic arm because on one of my explorations of the Vincent Apollo tribe it was crushed and had to be cut off. I also have a special robotic eye because it can help me discover unusual buildings and life.

1. Wake up and set my robotic arm up
2. Walk Pur along the floating canal
3. Get into my special outfit (made of moon substance)
4. Explore
5. Report in my findings
6. Walk Pur
7. Watch the newest movies (my favourite is Star Wars the end of all galaxies)
8. Sleep
9. Repeat 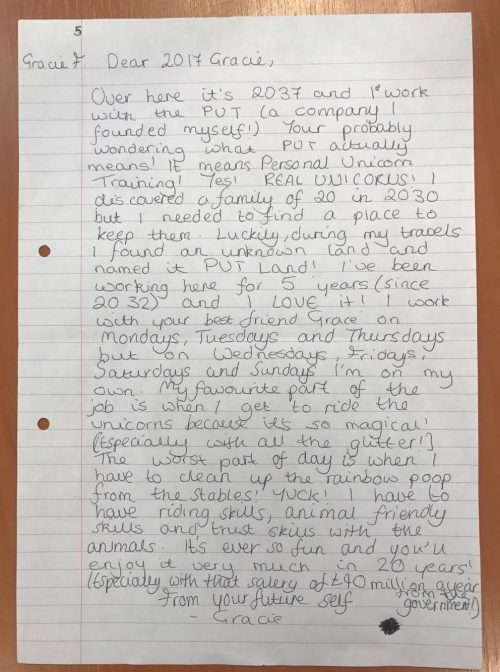 Over here it's 2037 and I work with the PUT (a company I founded myself!) You're probably wondering what PUT actually means! It means Personal Unicorn training! Yes! REAL UNICORNS!

I discovered a family of 20 in 2030 but I needed to find a place to keep them. Luckily, during my travels I found an unknown land and named it PUT Land! I've been working here for 5 years (since 2032) and I LOVE it!

I work with your best friend Grace on Mondays, Tuesdays and Thursdays but on Wednesdays, Fridays, Saturdays and Sundays I'm on my own.

My favourite part of the job is when I get to ride the unicorns because it's so magical! (Especially with all the glitter!) The worst part of the day is when I have to clean up the rainbow poop from the stables! YUCK!

I have to have riding skills, animal friendly skills and trust skills with the animals. It's ever so fun and you'll enjoy it very much in 20 years! (Especially with that salary of £40 million a year from the government!)

From your future self,
Gracie 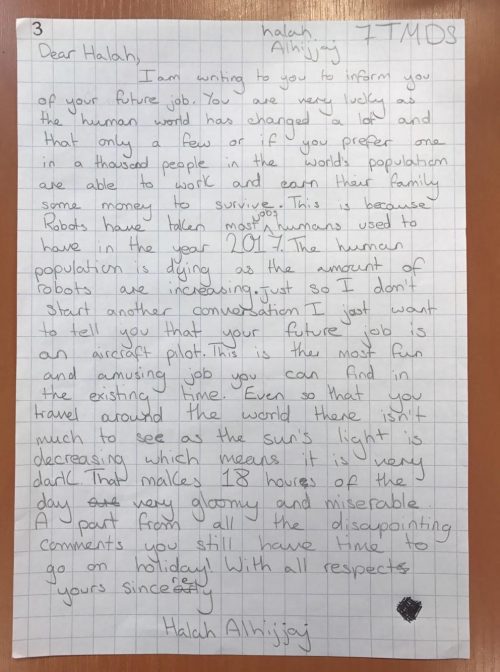 I am writing to you to inform you of your future job. You are very lucky as the human world has changed a lot and that only a few or if you prefer one in a thousand people in the world’s population are able to work and earn their family some money to survive. This is because robots have taken most jobs humans used to have in the year 2017. The human population is dying as the amount of robots are increasing.

Just so I don’t start another conversation I just want to tell you that your future job is an aircraft pilot. This is the most fun and amusing job you can find in the existing time. Even so that you travel around the world there isn’t much to see as the sun’s light is decreasing which means it is very dark. That makes 18 hours of the day very gloomy and miserable. Apart from all the disappointing comments you still have time to go on holiday! With all respects. 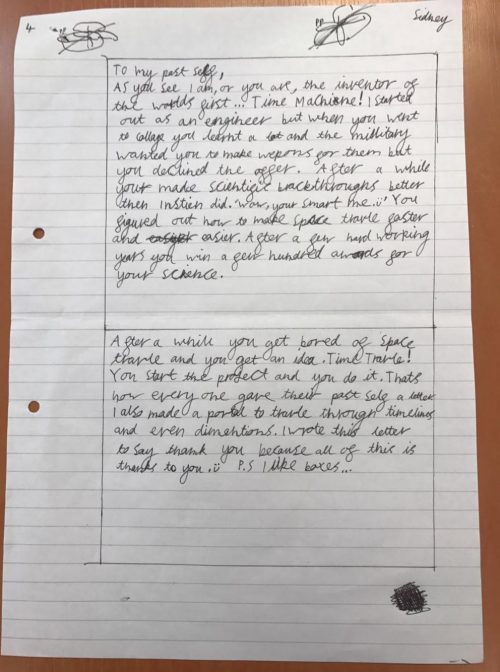 To my past self,

As you see I am, or you are, the inventor of the world’s first... Time Machine! I started out as an engineer but when you went to college you learnt a lot and the military wanted you to make weapons for them but you declined the offer. After a while you made scientific breakthroughs better than Einstein did. ‘Wow, your smart me: : )’ You figured out how to make space travel faster and easier. After a few hard working years you win a few hundred awards for your science.

After a while you get bored of space travel and you get an idea. Time travel! You start the project and you do it. That’s how everyone gave their past self a letter. I also made a portal to travel through timelines and even dimensions. I wrote this letter to say thank you because all of this is thanks to you. : ) p.s. I like boxes… 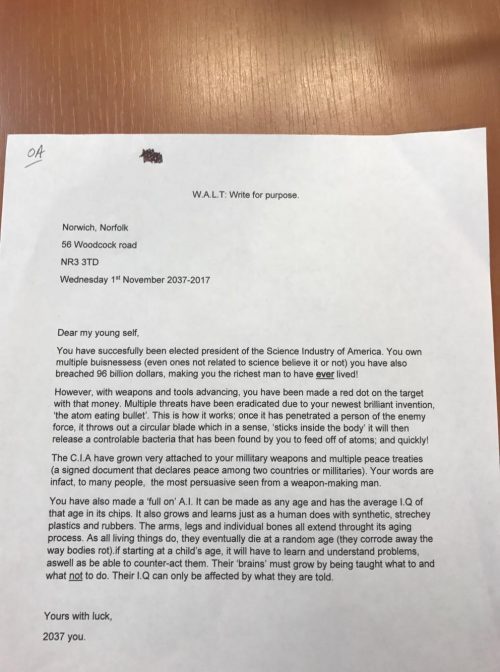 Dear my young self,

You have successfully been elected president of the Science Industry of America. You own multiple businesses (even ones not related to science believe it or not) you have also breached 96 billion dollars, making you the richest man to have ever lived!

However, with weapons and tools advancing, you have been made a red dot on the target with that money. Multiple threats have been eradicated due to your newest brilliant invention, ‘the atom eating bullet’. This is how it works; once it has penetrated a person of the enemy force, it throws out a circular blade which in a sense, ‘sticks inside the body’ it will then release a controllable bacteria that has been found by you to feed off of atoms; and quickly!

The C.I.A have grown very attached to your military weapons and multiple peace treaties (a signed document that declared peace among two countries or militaries). Your words are in fact, to many people, the most persuasive seen from a weapon-making man.

You have also made a ‘full on’ A.I. It can be made as any age and has the average I.Q of that age in its chips. It also grows and learns just as a human does with synthetic, stretchy plastics and rubbers. The arms, legs and individual bones all extend throughout its ageing process. As all living things do, they eventually die at a random age (they corrode away the way bodies rot). If starting at a child’s age, it will have to learn and understand problems, as well as be able to counter-act them. Their ‘brains’ must grow by being taught what to and what not to do. Their I.Q. can only be affected by what they are told. 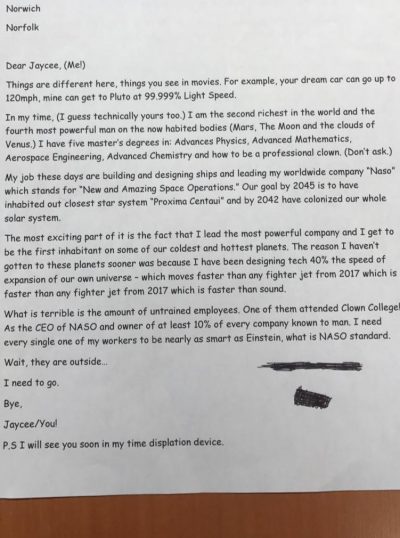 Things are different here, things you see in movies. For example, your dream car can go up to 120mph, mine can get to Pluto at 99.999% Light Speed.

In my time, (I guess technically yours too.) I am the second richest in the world and the fourth most powerful man on the now habited bodies (Mars, The Moon and the clouds of Venus.) I have five master’s degrees in: Advanced Physics, Advanced Mathematics, Aerospace Engineering, Advanced Chemistry and how to be a professional clown. (Don’t ask.)

My job these days are building and designing ships and leading my worldwide company “Naso” which stands for “New and Amazing Space Operations.” Our goal by 2045 is to have inhabited our closest star system “Proxima Centaui” and by 2042 have colonized our whole solar system.

What is terrible is the amount of untrained employees. One of them attended Clown College! As the CEO of NASO and owner of at least 10% of every company known to man. I need every single one of my workers to be nearly as smart as Einstein, what is NASO standard.

Wait, they are outside…

P.S. I will see you soon in my time displation device.