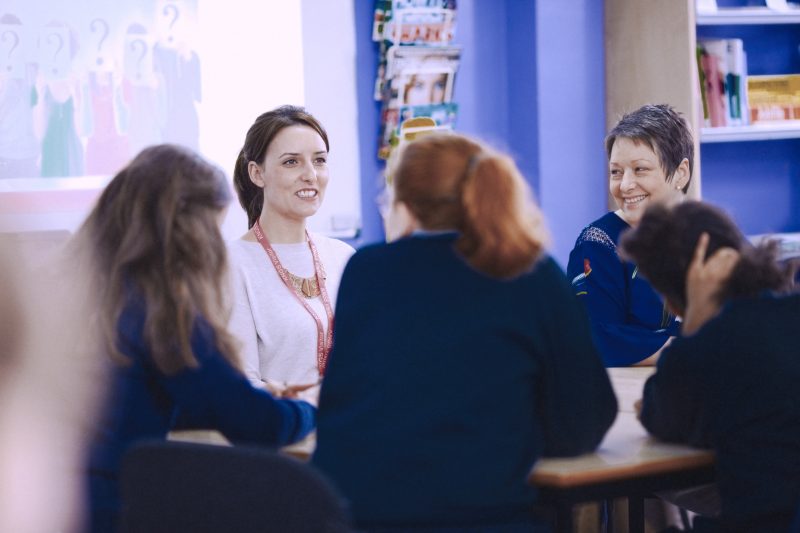 Anne-Marie Canning MBE talks to us about her experiences in school, her career journey and her reasons for returning to her old school.

School was very different when I was there, it wasn’t Outwood Academy Adwick it was Adwick School and then it was North Doncaster Technology College. It was a huge school with 2500 children in a village outside of Doncaster and it was having a tough time. It was struggling but they were brilliant with me; I had a couple of English teachers who were really supportive. Up until I got my GCSEs I was a very much a middle grade student, very well behaved, and then I got really good GCSEs and stayed on for Sixth Form which not many people did. They let me take 5 A Levels and I was getting A Grades and 100% marks on a few bits and bobs so the Head of Sixth Form supported me and was absolutely brilliant in helping me to think about university. She sent me on a summer school at Oxford and was just the most wonderfully supportive teacher you could imagine.

In preparation for the summer school I was sent a bunch of books in the post to read and then I went to Oxford for a week and discussed those books with professors, students, and people like me. I explored what it would be like to study at the University of Oxford and I think one of the really important things to say is that it wasn’t a very easy experience, I was really homesick and I found the experience quite difficult and outside of my comfort zone. However, I realised that being out of your comfort zone is what really accelerates you in life; if I’d just done the things that I was comfortable with I would’ve gone to a local university and I wouldn’t have reached as high as I did in terms of where I went and what I studied so it really encouraged me to aim much higher than I had been up until that point.

After Sixth Form I went to university, studied English Literature at York and worked as a student ambassador the whole time I was at university, helping to run the sort of summer schools that I’d attended and helping other young people to think about university. I became Student Union President, the first female President in about 13 years and from there I got a job at the University of Oxford working in outreach activities and communications; whilst also becoming an elected local councillor.

About 7 years ago, I moved to Kings College London and became the Director of Social Mobility and Student Success where I run a team of around 65 people in 4 departments to help young people access university and flourish whilst they’re there. I’ve sort of dedicated my career to what had helped me move forward in life and I even got an MBE this time last year for Services to Higher Education!

I still go back to Yorkshire quite a lot because I’m the independent chair of the Bradford Opportunity Area, there are 12 opportunity areas in the country where social mobility is at its lowest and Bradford is one of them so I head up the effort to improve life chances for children in Bradford.

I’d wanted to return to my old school for a while but it can be difficult for schools without the facilities available to enable visits from outside so when Future First came in they created an infrastructure and a supported route that allowed role models to come in and interact with the current students who are sat in the same seats they sat in.

I really wanted to go back to school because whenever I do a talk, and I do lots of talks to young people about university and making the most of life, I always say that I’m from Doncaster but I’m not really from Doncaster I’m from a village outside of Doncaster called Carcroft but there’s no point in telling anyone that because they won’t know where it is. The nicest thing about the visit was standing up and saying I’m from Carcroft and seeing the students’ eyes flash with recognition because it’s a place where you can feel quite isolated. Being able to tell that group of students I was from their village created amazing moment of connection. It shows that hyper local role models matter in places like Doncaster. I know from my own work and expertise that those connections you have and the people you’re able to use for help and support are really vital for getting on in life. All of the evidence shows us that role models are an engine of social mobility so I really wanted to provide that connection for young people in the school and I ended my talk by saying wherever you want to go I am willing to help you get there.

During the school visit I did a full assembly for the Year 11s and I met two groups of Year 10 and a group of Year 8s.

I took in some prompts with me to help tell my story including the book that helped me decide to do an English degree, a card from my favourite teacher who wrote to me after I was awarded an MBE and I also took the MBE medal because I’m a strong believer that it shouldn’t be kept in a glass case at my mum’s house!

I’ve got 3 bits of advice that I give to young people:

The first one is that you need to explore and nourish your curiosity, whether you want to go to university, do an apprenticeship or whether you want to go straight into work you’ll have things that you’re really interested in so it’s really important whilst you’re at school to allow yourself to explore those avenues. This might be by watching a Youtube video, listening to a podcast or getting some work experience.

The second thing I say to people is that it matters who you spend time with. Having supportive people around you at school is really important; value your friendships and relationships and how they can support you in where you want to go.

The last bit of advice is to remember that your achievements are not yours alone. The biggest lie ever told is the idea of a self-made person. The things we achieve are an accumulation of other people who have helped us on the way so when you do make it it’s really important that you help the next set of people trying to make their way in the world.

My advice to former students who are thinking of going back to their old school to speak to current students is to not be afraid to tell your story and show emotion. I showed a picture of my grandma and grandad at graduation and talked about how much it must have meant to them to see me graduating at university. It’s really powerful for young people to see an adult talking in an emotional way about being successful academically or professionally. It’s scary to do but the payoff when it works is so sensational that it’s worth putting yourself out there!

Sign up here to volunteer at your old school or college.