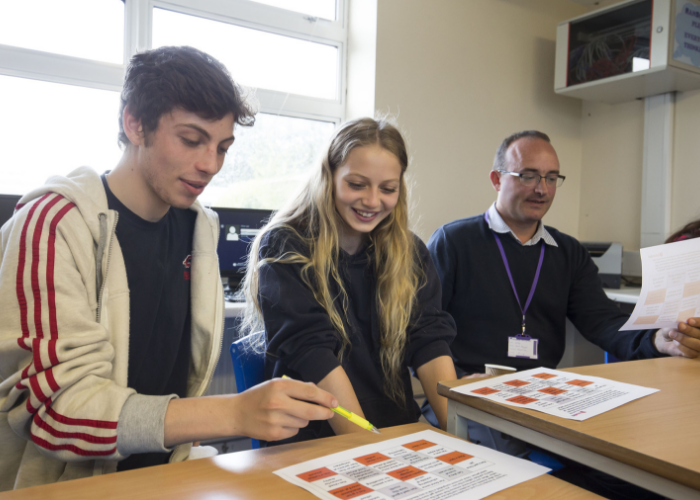 Keith Basson, People Development Team at Blackpool Transport Services Ltd, tells us about his experiences volunteering at his old school.

We started working with Future First after they contacted Blackpool Transport customer experience team about volunteering at Unity Academy’s World of Work day. The opportunity was given to me by my manager and I was especially keen as Unity Academy was where I went to school (in its former names Warbreck High School/ Beacon Hill School).

I attended the first volunteering day back in March 2018 at Unity Academy feeling confident in talking to young people as I have lots of experience coaching young Blackpool FC Academy Players.

At the Unity Academy workshop, we worked with Year 10 students on building resilience as well as talking to the students about our own first-hand experience of how we’ve got to where we are today. I felt supported by Future First from the moment I arrived at the school with a briefing on how the session was going to be organised and what our roles as volunteers would entail.

I attended numerous workshops throughout 2018, sometimes on my own or with a colleague, all being very well organised and professionally pieced together. Blackpool Transport volunteers were able to arrive without any time spent planning or preparing resources just ready to share experiences and advice. All of our volunteers were thrilled with the impact they had on the students, dispelling misconceptions about working for a transport company. Many students only interact with bus drivers whilst travelling to and from school and don’t see it for the skilled and accomplished job it is. The students enjoyed learning about how the transport systems run, from engineers, digital marketers, the planning team to tram drivers.

Since attending the Future First world of work days, Blackpool Transport has strengthened its internal links between the customer experience team and the bus drivers and engineers to ensure the company is doing all it can to engage with the local community.

Two Blackpool Transport employees volunteered at another World of Work day in July and when a small minority of local students were causing problems with antisocial behaviour on the buses this term, Blackpool Transport had links in place with the school because of volunteering there to effectively tackle the issue. They organised assemblies with all year groups at the school to highlight the impact students’ behaviour can have on Blackpool Transport staff. The feedback, particularly from younger students, was incredibly positive and has really helped to strengthen community relationships in Blackpool. We are now hoping to speak to primary schools and even parent groups – things we believe wouldn’t have happened without the initial opportunity from Future First.

I think it is very important that students see positive examples of role models in good jobs in Blackpool, which can often be few and far between. The workshops with Future First placed a lot of emphasis on all the skills bus drivers, or engineers, or bus trainers need – emphasising the wealth of skills in Blackpool and the importance of local people in keeping the system moving (literally!) Being one of the Fylde Coast’s biggest employers after the NHS, we talked to the young students about the apprenticeships that we have available and let them know of opportunities they might consider in the future.

The opportunity provided a change for the team from their every day jobs; somewhere they can learn new skills and share their experiences. Volunteering has had a positive impact on the staff at Blackpool Transport and we are looking forward to continuing working with young people and helping improve their aspirations for the future.