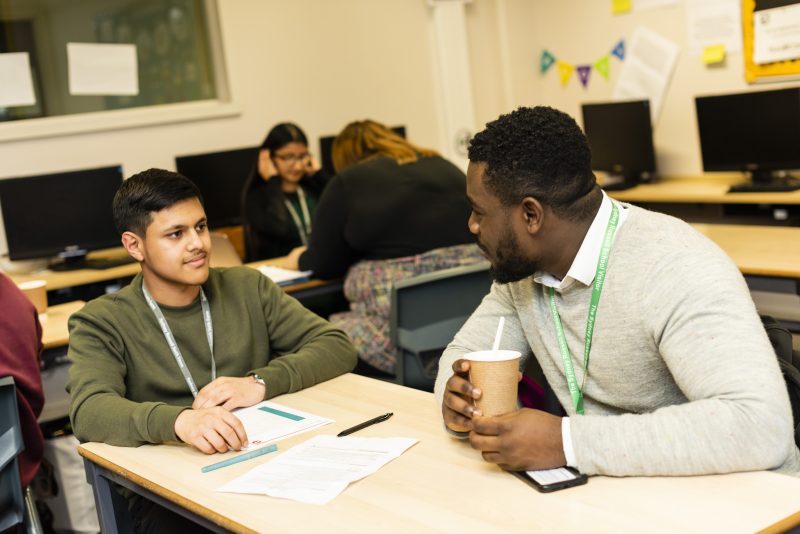 Katie and Lewis, both alumni of Robert Clack School, tell us how the Future First alumni programme has helped them and how they’re giving back to their old school.

Katie joined the alumni network and wanted to give back to her old school.

I became aware of the Future First network in sixth form through Mrs Monk who was running the programme and wanted everyone to get involved. During that time, Cushman & Wakefield came to the school to present their apprenticeship scheme to us. Historically, they had a relationship with a school in Clapham but the year I applied was the first year that they came to Robert Clack to form that partnership. The teachers were really supportive throughout the application process, I got the job and enjoyed it so much that I thought it was really important to go and give that back to my old school and continue that partnership.

The programme I was on was essentially an apprentice programme which was then stopped for a few years whilst Cushman & Wakefield merged with another company. Once that was finalised we designed a whole new apprentice programme which I was heavily involved in and I was really keen to drive that partnership with Robert Clack and make sure that students still had that opportunity that I had; I used the alumni network to make sure that support was given to students at the school.

I went in and presented to sixth form about the apprenticeship, what I do and what my day to day job looks like as well as my journey through the programme. I then made myself available to contact if any of the students had any follow up questions. One of the sixth form teachers, who Lewis and I both knew really well, put him and I in touch and asked me to give him guidance. I helped him through that process with tips and answering his questions during the application period. Once he became one of the successful applicants, we would meet regularly for catch ups to go over his questions, queries or any issues and try to support him, and now we have a fantastic working relationship.

I think it’s massively important that we go back to the school as role models for current students. As part of the alumni we’ve gone through similar things, we may even have similar home lives. There’s a resemblance one way or another and I think that’s why Lewis and I clicked so quickly because we have very similar home lives. It’s all well and good all of these wonderful people coming in and telling the students about the possibilities that are out there but when the students can see someone who has been in their shoes go on and be successful, have a fantastic job and love what they do it’s so much stronger.

Lewis was given help and guidance by former student Katie when applying for an apprenticeship.

When I was in sixth form, Katie came in to give a talk about Cushman & Wakefield where she was doing an apprenticeship. She gave an introduction to the apprenticeship and then she discussed how the apprenticeship was structured and more about the company. I thought it sounded quite interesting and very different to what I was studying so I signed up for more information and attended an insight day at Cushman & Wakefield to see the type of work I’d be doing if I got onto the apprenticeship. During the insight day we ran through a group project in which we had to work out the best options for a company who wanted to relocate their offices, and everything that would be involved in the process. We then presented our projects to each other at the end of the day. After that I decided to apply for the apprenticeship with the help of Katie who gave me advice and support throughout the process and stills continues today!

I’m currently in year 3 of the 5-year apprenticeship and I’ve just moved departments to the City of London agency where we look after clients who want to buy and lease property in the City of London and the outskirts of the city. I’m really enjoying being in this team, it’s probably one of the best places you can be as a UK agent because you are acquiring office space that is so competitive and exciting.

I wouldn’t have known what to do, especially within the first year of the apprenticeship, if it wasn’t for Katie. She was such a big help; we met up quite a bit in the first year for catch ups and coffee to go through what I should be expecting and how to get the most out of the apprenticeship. Katie also introduced me to a property network for young graduates and apprentices where you can attend events with professional speakers for free, of which I am now a committee member.

To give back to the school and alumni programme that helped me out, I joined the Future First alumni network at Robert Clack. Also, I created a mentoring programme at the start of 2019 for students in year 9, a few of which had behavioural difficulties like I did when I was at school. Being able to support them through that was great. After we finished the mentoring programme, which was really successful and had great feedback, we gave them a tour of the Cushman & Wakefield office and two of these students are coming back for work experience this summer. It’s gone full circle from me being introduced to the alumni to going back and helping the next group of students.