Marc on imparting his knowledge to current students 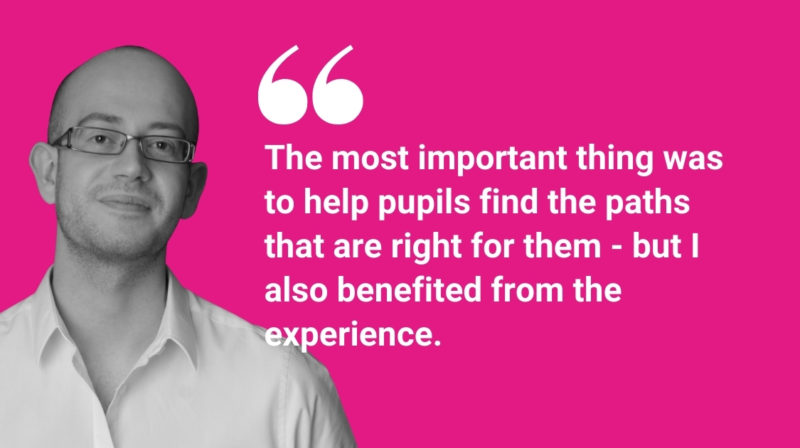 Marc Dunleavy is a freelance creative producer and project manager in the music industry.

Here he talks about volunteering through Future First to help Year 9 pupils at Discovery Academy with their GCSE choices in his childhood home of Stoke-on-Trent.

It was wonderful to have the opportunity to go back to Stoke-on-Trent and help the students at Discovery Academy with their choices for GCSEs – even if it did have to be virtually!

I went to the neighbouring school, Blurton High – which is now Ormiston Sir Stanley Matthews Academy – and I know how tough it can be to make the right choices when there are so many options.

When I left school and went to university in Huddersfield to study music, I really enjoyed the Arts and music and was convinced that was what I wanted to do. But while I was at university, I wasn’t sure what career paths were open to me and what direction I wanted to take.

In the end, I started working in bars and clubs and for about 10 years I worked in the hospitality industry. Despite eventually working for a major company and becoming one of their highest paid managers, I realised music and the Arts were still my passion, so I took up an unpaid internship working for Opera North Leeds and started afresh.

Since I moved into the music industry about 12 years ago, I’ve worked for a number of companies, organised music festivals and also worked for music charities to do fundraising. Now, I work as a freelance producer and project manager. It’s been a rather long road getting here but I’m so glad I’ve done it.

The most important thing was to help the pupils at Discovery Academy find the paths that are right for them – but I also benefited from the experience. It was very interesting for me to think about how I talk about my job and what I do. It was a good learning point because it’s quite a weird job and a weird industry that I work in!

Discovery offers lots of creative subjects, so we talked a lot about transferable skills, which is really important when there are so many careers out there to choose from. It’s vital to remember that even if you don’t pick the subjects that are ideal for where you want to get to, there are still many ways to help you get to the right point in the end.

Feedback from the Year 9 at the Discovery Academy session Marc attended included:

“We could hear about normal people’s journeys – so it’s not a celebrity, it’s just average UK people”

“I liked that we had advice from people that aren’t teachers.”

“It’s motivated me to find what I want to do in life.”