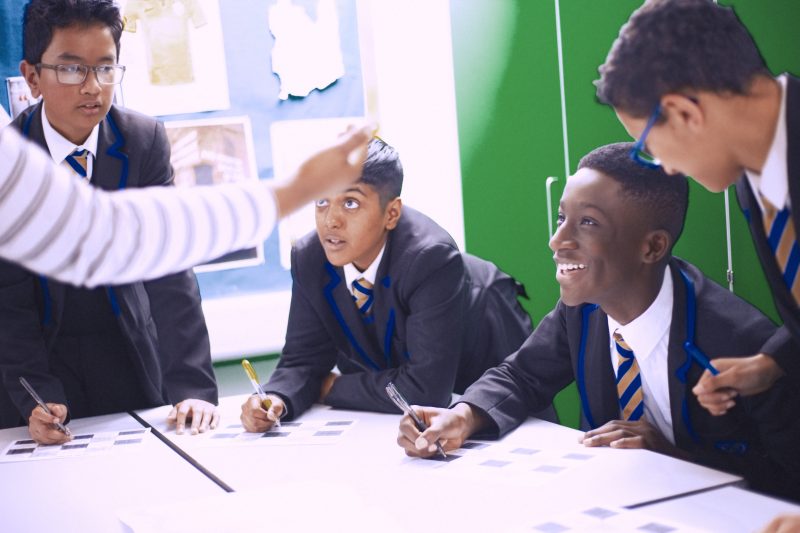 Jed is an Applications Engineering Manager living on the Isle of Wight. He left City of Norwich School in 1994 and recently returned to volunteer for a World of Work day to support Year 10s.

I really enjoyed my time at City of Norwich School. I feel lucky that I had a good time in school and was really well engaged.

At school, I had a clear picture of what I wanted to do so after leaving I attended the University of Plymouth to study Materials Engineering. As part of my degree I completed a year out in industry which was really valuable and I learnt lots about engineering and the world of work. After graduating, I went straight into employment.

I am now an Applications Engineering Manager which involves research and development but is largely customer focused. I get to help our customers in making the decision on what materials to use for their products – typically in sports and premium cars.

I signed up to support my old school as an alumnus because of how much I enjoyed and liked the school. I took a lot of inspiration from there and learnt a lot. I remember a former CNS student returning to school to talk about their career pathway when I was studying my A Levels. They talked about their role for Ford Motor Company and how they design the plastics for cars, which is not dissimilar from my current role! I was already heading in a similar direction as I was studying Physics and Maths but that visit outlined a much clearer path for myself. Also, being that age it was just really cool to hear about such an interesting career.

Going back to visit was really quite funny. Walking around the school I left 25 years ago brought back so many memories! Actually, where I parked on the day was where I used to have to do the bleep test in PE. It was really interesting to see the changes to the school but also the parts that had not changed at all. I recognised some tiling design that is definitely still the same.

The day I volunteered I was part of a ‘World of Work’ day where I was helping in workshops for Year 10 students. At the start of the day it was really great meeting up and bumping into other former students. Although there was no one from my year group, there were other alumni who were at school at a similar time to me. It was interesting to catch up with what others were doing; particularly as two of the former students were in similar fields as engineers.

Going into the classroom was quite daunting, having to engage with a bunch of Year 10’s and building up a rapport with the group seemed tough. It was quick to work out who the confident young people were as they initiated conversation and were happy to give me eye contact. Other members of the group took longer to engage and it was so interesting to work with such a wide range of young people.

There were so many different characters in the room with a variance of interest. Some of the young people were actually looking at engineering as a career so it was great to interact with them. One girl was focused on medicine and another wanted to be a marine biologist and they asked me lots of questions. I also spoke with students who were not particularly enjoying school and through a little bit of conversation I found out all about their interests outside of school. I enjoyed helping them connect the dots between their extra-curricular interests and the skills they are developing.

One of the questions we were asked at the end of the session was “What would we tell our Year 10 self if we could go back in time?” I would say that whoever you are, whatever your skill level, that if all else fails, pick something that you like doing, something you are passionate about and feel good about your decision. Your parents may have one idea, your teachers may have another, and you may have no idea but that’s ok, follow your heart.