Regent High School recently ran a leadership training session for Sixth Form student leaders. Three alumni coached students through activities focussed on leadership qualities and characteristics. Mohammed, a deputy manager, Olawele, a sports journalist, Shakur, a brand and content management lead and Mohamed, a paralegal, had very different views about what makes a good leader. This sparked a lively debate with students discussing the type of leader they would like to be in school and in their future career.

Alumni coached students through a ‘picture of me’ activity, in which they identified their own interests, skills and strengths. They then worked in small group to build towers from straws, before alumni fed back on their teamwork and leadership skills.

At the end of the session, every single one of the students told us that meeting alumni had made them more confident about their future.

Helston Community College in Cornwall invited two alumni apprentices to speak to Year 12 Construction students in a session designed to boost motivation. Elliot Childs and Jack Noy talked to students about the realities of carrying out an apprenticeship.

The session was one of a series of events taking place for Future First’s Back to School Week South West.

Elliot Childs is an apprentice staff plumber at Coastline Housing and Jack Noy is an apprentice agricultural contractor. Both former students told students they had chosen the apprenticeship route because they could earn money while learning. Elliot explained the realities of the job, saying that although his apprenticeship is hard work, it’s also very rewarding. He also told students that he sometimes wondered whether he had chosen the right route but that perseverance and hard work allows him to focus on the light at the end of the tunnel.

After the session, we asked Elliot why he feels it’s important to ‘go back, give back’:

“I really want the students to learn that hard work leads to success. I hope I’ve helped them understand what life after school can bring. Helping students helps me. It’s great to reflect on my own journey and how I’ve developed as a person since I was at school.  It’s a real confidence boost too- getting up and talking on front of so many people!” 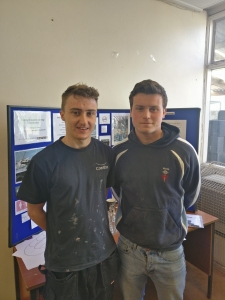 We’re delighted to announce the schools taking part in our Employability Skills project, supported by the Rothschild & Co. Charitable Giving Programme. The project will enable students in four schools to develop their written and oral communication skills, supported by alumni role models. The young people will work with alumni from similar backgrounds over three years to improve their self- belief and develop their skills.

The successful schools are in Cornwall, Bristol, Newcastle and Cambridgeshire.

The first year will focus on developing students’ verbal communication skills, and years two and three will look at written communication.  In both year one and year three, students will do a mock interview, held offsite in a real workplace environment.

Alumni will coach students through activities that build self-awareness, confidence and drive, and increase their understanding of the options open to them in the future. We know that alumni can have a powerful influence on the aspirations and confidence of young people- 85% of students say that alumni events help them to understand that “people like me” can be successful. Future First staff will train and support alumni to fulfill this role in each session.

We’re excited to share an update on the first sessions in the Autumn term.

On 2 May 2017, Future First Senior Communications Officer, Anna Darling, will run a webinar for schools thinking about becoming a Future First member. Schools will have the opportunity to ask questions about what membership involves, time commitment, cost, what we offer and hear interesting examples from other schools. The webinar will be recorded and posted on our website shortly after the live stream.

Future First has been on the road. Our recent Back to School Weeks in Birmingham and the South West celebrated the inspiring role models that go back and give back every day. 28 alumni events took place across two weeks and over 3000 students took part. National treasure, Julie Walters, joined over 200 alumni in showing support for the campaign. 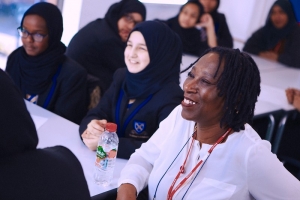 March began with Back to School Week South West. From apprentices, CEOs, and engineers to business owners, financial advisers and farmers, the week saw 36 alumni go back, give back in 26 events across Cornwall, Devon and Somerset.

Every former student had a unique story to tell.

Claire Stocker left Penair School, Cornwall, in 1985 and has been a nurse for 20 years. She told students she had good memories of the school but she didn’t always fit in… “I want to reassure students that there is a future after school. I was diagnosed with dyslexia and I found lessons difficult. I’ve had to find a way to communicate well through my job as a nurse.” Claire told students to pursue interests outside of their career, having written several books including ‘The History of Truro’ herself. 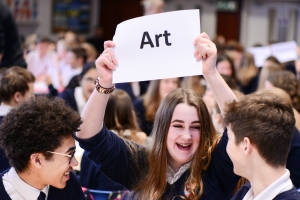 At Chilton Trinity School in Somerset, trainee GP, Claire Macadeem, told students to find a job that makes them happy and not to worry if they change their mind about future plans. At Churston Ferrers School, Police Community Support Officer, Beccy Pearce, told students to keep asking questions: “take advice, ask for advice, and use it to make your own decisions”.

The following week, we headed to the Midlands for Back to School Week Birmingham. Backed by national treasure, Julie Walters, we visited schools across Birmingham showcasing the incredible ways in which alumni are inspiring and motivating today’s students. An eclectic range of alumni, from forensic scientists and family support workers to CEOs and undergraduate students, headed back to their old schools to take part in the event.

The alumni stories from Birmingham were no less inspiring than those in the South West.

At Kings Norton Girls’ School Suzanne Swingler told students that she had qualified as a nurse despite being diagnosed with dyslexia after leaving school. Samantha Peckham became a mum at 16 and now sits on the Women in Transport Board. After going back to speak to students at her old school she told her story on BBC Radio West Midlands, News Now, Europe Breaking News, Pressreader.com and in local press, including The Birmingham Press.

At Holyhead School, Abdul Sohal, who works in IT at Land Rover, told students: “my job hadn’t even been invented when I was at school.” Students heard how his success has been driven by strong communication skills and the ability to build a strong rapport with people from all walks of life.

The alumni stories were different but their message to students was the same: “We sat in the same seats as you and walked the same corridors as you. Now we are successful and you can be too.”

Next up is Back to School Week Norfolk, 2-7 July– we’re excited to share inspiring stories from the region in the summer.

Future First's Director of Programmes, Chloe Halpin, recently joined a panel of women from the charity sector to celebrate International Women's Day at Taylor Wessing. Watch the video below to hear Chloe speak about the power of female role models for young people.