Our night at the Pearson Teaching Awards 2019!

Last Sunday, a group of the Future First team had the pleasure of attending the Pearson Teaching Award’s ceremony at The Roundhouse in Camden. As a charity, we witness first-hand the incredible impact teachers have on their current students and the lasting impressions they make on former students who return to their schools through our programme. We were honoured to be able to join the celebrations and sponsor two awards, recognising schools who have been ‘making a difference’ over the last year. 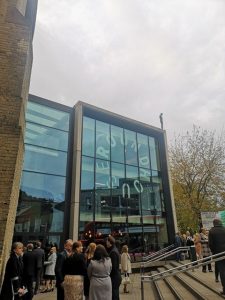 The organisers had done everything to make the night feel special. Approaching the venue, we were met by the staff we usually see managing crowds of students in bustling school corridors, instead decked out in sparkling dresses and suits. The Roundhouse as a venue added to the magic of the evening, set out with decorated tables where guests would be sat for the event’s ceremony and spectacular gala dinner.

We were all delighted to see some of our favourite celebrity guests present awards, including Konnie Huq, former JLS member JB and Anneka Rice, all who praised the challenging and incredible job teachers do every day. And we even got a surprise performance from the cast of hit West End show ‘Six’, which brought to life a well-loved mnemonic we all learnt about Henry VIII’s wives at primary school.

A particular highlight for fellow Alumni Programme Officer, Nat, and one of our Directors, Laura, was hearing the remarkable story of Bradford’s Carlton Bolling College. The school was put into special measures by Ofsted in 2014 who claimed not enough was being done to protect students from the risks of extremism, but achieved outstanding status in 2017 and this year won the Future First-sponsored award for Secondary School of the Year. For Nat, a particular stand out was the school’s inventive introduction of a boxing academy for those excluded from mainstream education, helping students gain confidence, improve self-esteem, increase fitness and exercise self-discipline.

Laura had the chance to meet the staff after the ceremony, and found it inspiring to hear about ‘the journey the school, students and staff have taken to get to where they are today… in fact they perfectly reflect FF’s values.’ 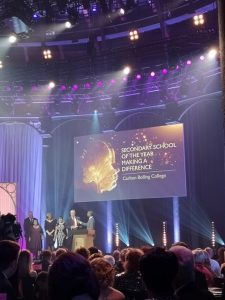 Alumni Programme Officer, Emily, was touched to see the Lifetime Achievement Award go to Keith Berry, who has been leading Park Community Academy in Lancashire for young people with SEND for over 20 years. For both this school and Ysgol Gyfun Cwm Rhondda, which won Headteacher of the Year, what was emphasised was the strong sense of community fostered by the schools and the students’ recognition that their teachers wanted the best for them.

As a charity that helps schools stay in touch with their former students, perhaps the best part of the evening was seeing how alumni had contributed to these schools’ communities. Many former students featured in the videos and speeches of schools awarded. Stephen Sadler from East Barnet School, who received the award for Digital Innovator of the Year, was praised by one of his former students, who now at university said he and other alumni often go back to the school and still contact Stephen for advice.

It was a wonderful evening, full of celebration, gratitude and quite a few tears! Our Director of Programmes, Beth, summed up our thoughts:

‘It was fantastic to see so many different teachers getting recognition for the amazing effort they make to support students every day of the school year. There were some powerful stories throughout but it was clear that all of the winners were proud of their hard work and shared a common purpose to do the very best for the students they teach.’