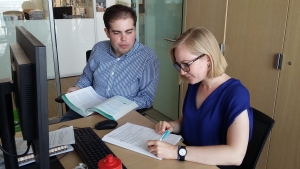 My school years were not unusual. I attended a state primary, then a comprehensive, and never received any tutoring throughout my education. My school experience is somewhat less usual, however, among trainee lawyers at city firms.

I really enjoyed my years at my comprehensive school. It gave me an opportunity to mix with people of all abilities, and to respect difference, and has left me with the overarching ethos of treating all with equal courtesy, whatever their position. It wanted all students to achieve the best they could, and teaching was rigorous – which, as an enthusiastic learner, meant I was able to excel.

Yet during my teenage years, one refrain I heard far too often from fellow students when discussing careers was “I can’t get there – I didn’t go to private school, I didn’t go to Oxbridge”. It was a viewpoint I never subscribed to- Instead, I took the view that while it probably was easier for people from certain backgrounds to succeed, that was no reason not to put all my effort into doing as well as I could.

I was very lucky to be taken on by a disability consultancy, which resulted in me being invited to meetings with graduate recruiters of large companies across the city. One of these firms was Reed Smith, a leading city law firm with specialisms in media and shipping, both areas that interested me.

Reed Smith had just finished a comprehensive overhaul of their recruitment programme the year I applied. This was to ensure all parts of the process were objective and merit-based, leaving less opportunity for bias of any kind.

I’m now trustee of a charity which runs schools in the state sector and I visit schools across the country. I’ve been asked back to address my old state school…to make it clear to students that they shouldn’t write off their chances simply because of what school they go to. Instead, they should take every opportunity offered, assess their abilities by their talents and capabilities, not background and, as long as they’re willing to put the work in, aim high.

Going to my local comprehensive hasn’t stopped me becoming a lawyer; in fact, growing up with people from all walks of life and social backgrounds has helped me learn how to get on with a wide range of people, and to understand and empathise with those not like myself. Nobody is denying that structural barriers exist, least of all myself. But with firms putting in effort to tackle them because they recognise they’re unhelpful, change is on the way.

A friend of mine once made the quip that ‘if you can see it, you can be it’, and it summed up exactly what I’d been trying to put into words about the importance of alumni networks. Students might have great drive, ability and passion but think a certain career is unrealistic for them, even if it isn’t, if they feel they wouldn’t be able to achieve what’s needed, or wouldn’t be accepted by that profession if they did.

Alumni networks have been tried and tested across the best private schools, and proved to work brilliantly in providing networking and linking students up with opportunities that suit their ambitions. There’s no reason why their benefits shouldn’t be extended to the state sector. And they provide benefits to the former students who go back and give back too – we’re reminded where we came from, allowing us to stay grounded, and listen to different views, opinions and perspectives from those we might deal with at work, allowing us to work better.